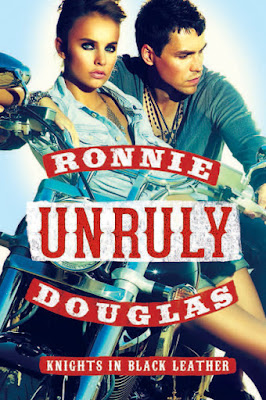 The
second novel in Ronnie Douglas’ sexy Southern Wolves motorcycle club
series—reminiscent of Kristen Ashley and Jay Crownover—tells the story of an
aspiring fashion designer and a biker who discover a desire that knows no
limits.
When the daughter of one of the
Southern Wolves gets a flat in the middle of a thunderstorm, there’s only one
thing to do—strip down to her underwear and get a little muddy. But when Alamo,
the sexy biker shows up to rescue Ellen yet again, things are bound to get a
whole lot dirtier.
Between the trouble he left behind
and club rules, Alamo knows he needs to stay clear of Ellen. He’s not looking
for a woman or complications—even when that woman is everything a man could
want. Unfortunately, Ellen isn’t playing by anyone’s rules but her own these
days, and a Southern woman who’s been raised by Wolves is awfully hard to deny.
So when they give in to their raging
attraction, both get much more than they bargained for.
BUY NOW
Amazon | B
& N | Google
Play | iTunes | Kobo

Genre: MC Romance
Book Points
What was the story about?  I woman looking for her way out of a storm, however what she wasn’t prepared for was the bigger storm lurking on the horizon!
Who were the main characters?  Ellen and Alamo
Were the characters credible? Yes
Did the main characters run into any problems? Adventures?  Isn’t their always an adventure in an MC book?
My Opinion
Did you like the book?  I thought the book was good.  It wasn’t like the normal MC romances I read, but I did enjoy it 🙂  I thought that the story was less focused on the romantic elements, and more so on the story at large.  If you don’t enjoy the more dark MC reads, this for sure will be right up your ally!!
My recommendation
Would you recommend this book to another person? For sure!
What type of person would like this book? I think anyone who is turned off by some of the darker more taboo MC books out there, would totally eat Unruly up for dinner!!!

Ronnie Douglas is the writing name for a multiple NYT
bestselling author. Drawing on a lifetime love of romance novels and a few
years running a biker bar, she decided to write what she knew–dangerous men
with Harleys and tattoos. Her debut “Ronnie book” was indie-published as part
of a series she created and wrote with friends in 2014. You can find Ronnie at:
http://www.ronniedouglas.com
Website | Facebook | Twitter | GoodReads
Don’t Miss UNDAUNTED,
the first title in the Knights in Black Leather Series