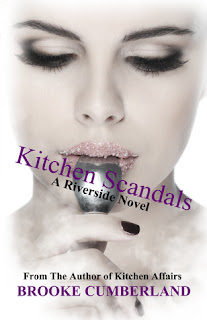 Synopsis:
“She finally found the one…
but he has a hidden secret. Could this be the breaking point for Molly?
Has she endured too much?
Drake and Molly had instant chemistry in Kitchen Affairs, but when secrets go all wrong, their relationship will be tested, feelings get hurt, and limits will be reached.
Someone interferes with their relationship, keeping them distant and longing for answers in all the wrong places. Some people are not who they seem… leaving a betrayal of lies crashing down on them.
Can they recover their once intense, sensual chemistry? Will love be enough?
Secrets, betrayals, and scandals…
Chicago’s hottest couple, Molly & Drake, go through big changes, hidden secrets, and tragedies.”
(http://www.goodreads.com/book/show/17566166-kitchen-scandals?from_search=true)
Review:
This book was so much better than the first book.  Molly and Drake’s characters developed so much thru this book.
There were a lot of big surprises thrown into this book.  First off, Drake a daddy!!  Oh, and lets not forget the fact that he KNEW this before he even met Molly, and after a year, still haven’t found time to tell her until he was forced too!  That led to some turmoil, but as always Molly was very forgiving.
Now, enter Molly’s stalker, and her admirer!  Nikos is not only her superior, but he his hopelessly in love with her! (remind you of anyone, cough….Travis…).  He is not very forthcoming about his affections, but Drake sees what Molly doesn’t.
There is a stalker.  We don’t know who it is, or wether they are stalking Molly or Drake, but they are not friendly.  They leave messages that Molly is too good for Drake, that Drake doesn’t deserve Molly, plants items in their home to stir up trouble, and so on.  Molly has her idea who it may be, and Drake has his ideas.  Turns out they are both wrong!
I don’t want to let the cat out of the bag on who is at fault,  but there is a good amount of drama, and suspense in this story, and lots of hot steamy parts!!  Makes for a good read.  Brooke has done a lot better job her second time around!!