With the weight of the club on his shoulders, Cole Marek, president of the Knights Corruption MC, had only one choice:
Turn their livelihood legit.
Everything was falling into place until one unexpected, fateful night. With an attack on his fellow brothers, Marek had no choice but to retaliate against their sworn enemy.
The Savage Reapers.
Swarming their compound, he comes face-to-face with the infamous daughter of his rival club, making an astonishing decision which would change his life forever.
She was the enemy.
She was the prize.
She was a game changer.
Sully Brooks led a desolate life, her entire existence dictated first by her father, then by the man who’d claimed her when she was only fourteen. Years of abuse shaped her into the woman she became, but she longed for something more. Craving an existence where she was free to live a life of simplicity, she wanted release from the harsh realities she’d known since childhood.
Will her prayers be answered when the enemy strikes? 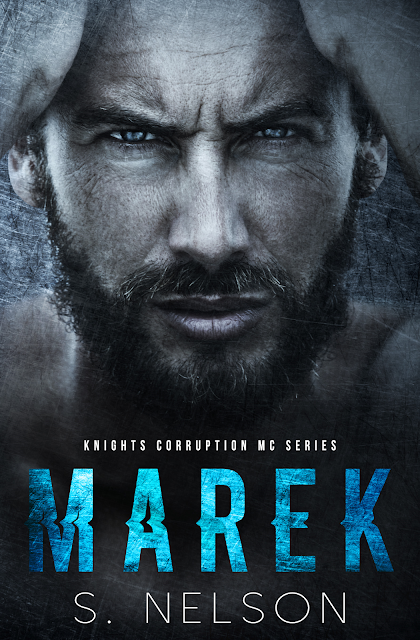 “Nothing I can say…. Except that this book was absolutely amazing!” ~Jane (Goodreads Review)

A loud crash jolted me back into the reality of the situation. I waited for more gunfire, but all that followed the toppling dresser was harsh, ragged breathing. I wasn’t sure if the sounds were my own or from those who had just entered the room.
Then one of them spoke.
A man with a deep, gravelly voice. A voice which sent shivers of fear and fascination deep into my soul. The mixture of feelings confused me, but I had no time to delve into what they really meant. The only focus in the forefront of my disheveled mind was to figure out how to survive.
Would I beg for my life? Would I appear weak in the face of the enemy? I couldn’t answer with certainty, and that alone was disarming. I had no idea what to do, what to say or how to feel.
Luckily, the decision was stolen from me the instant my eyes found him.
A tall, broad man stalked forward, every step closer deciding my fate. My head had instinctually risen so I could see who was coming for me, and what I saw stopped my heart. While my soon-to-be captor was covered in blood, no doubt from his up-close-and-personal bloodshed of my fellow Savages, his prowess shined through. His pale blue eyes pinned me defenseless, his hair short and cropped to his head, a trimmed beard covering his sharp jawline. Blood dripped from his cheeks, and I instantly wondered if he’d been hurt.
The man who had come to kidnap me was the most handsome man I’d ever laid eyes on. But I vowed then and there to never fall prey to his charms, if ever he decided to enchant me with them. Although I hated my club, my father and Vex, I wasn’t a traitor. And falling for the enemy was the worst kind of sin to be committed in our ruthless, deadly world.
Shit, as far as I knew, he could be the Devil’s nephew, just as brutal and evil as my father and Vex.
Reaching forward, his hand was suddenly thrust into my personal space. Maybe if I close my eyes they’ll all go away. Maybe it’ll all be an awful dream, a nightmare I’ll soon wake up from. Shutting my lids tight, I squeezed my hands over my ears and drowned out the sounds in hope everything would return back to normal.
I’d never wished for my life more than I did right then, which was probably the saddest revelation I’d ever had. 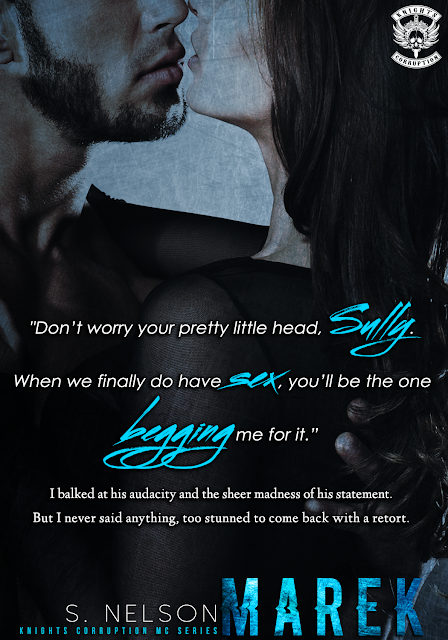 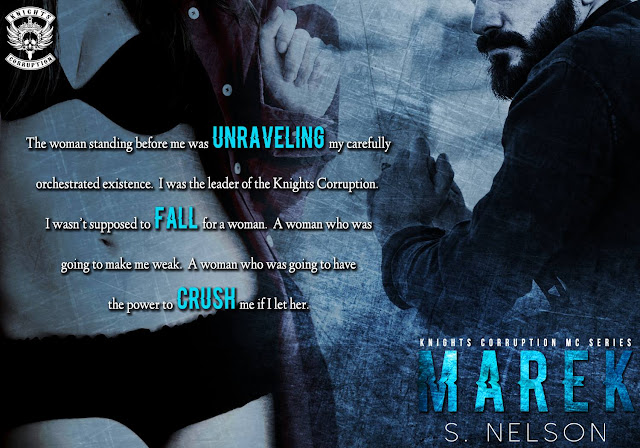 As you all know, MC books are my absolute favorite.  There isn’t anything I like more than when authors use authentic MC lingo, and situations in the stories.  When they are more of a realistic fiction, than 100 percent fiction.  I feel that S.Nelson nailed it with book one in the Knights Corruption MC Series, Marek.  It was fresh, intriguing, and totally up my alley.  Cant wait for more 🙂

S. Nelson grew up with a love of reading and a very active imagination, never putting pen to paper, or fingers to keyboard until 2013.

Her passion to create was overwhelming, and within a few months she’d written her first novel, Stolen Fate. When she isn’t engrossed in creating one of the many stories rattling around inside her head, she loves to read and travel as much as she can.
She lives in the Northeast with her husband and two dogs, enjoying the ever changing seasons.